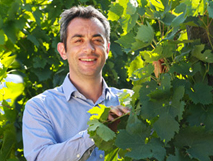 “A great wine has to have a perfect balance between complexity and elegance, be extremely easy to drink, transmit unique emotions and express the typical characteristics of the terroir it represents.”

Born in Milan in 1973, after his classical studies he graduated in Agricultural Science at the University of Milan. As a student of the well known Italian Professor Scienza, he was in charge of a pilot project in collaboration with the Institute of Viticulture in Milan on the DOC Bolgheri zoning, which allowed him to manage micro vinifications for the Consorzio del Vino Doc Bolgheri and collaborating with Tenuta dell’ Ornellaia. His training included significant international experiences in wine making: after attending professional workshops on viticulture at Faculte d'Oenologie de Bordeaux, in France, he studied various production systems in Chilean and Argentinian wineries and worked in New Zealand, at the Deaniel Schuster Wines Estate, owned by world famous namesake consultant. After returning to Italy, he began his career as winemaker in the Vulture area, at Tenuta Le Querce, Barile (PZ), and then moved to Chianti Classico, where he worked as cellar master for Tenuta di Arceno , an estate owned by U.S. group Kendall Jackson. Stefano Ferrante is nowadays the Chief Winemaker of Montecampo, in the Veneto Region, one of the the most highly regarded winemaking areas in Italy. Always attentive to the world of organic, Ferrante aims to continue enhancing sustainable viticulture, through a total traceability system of the wine production cycle.